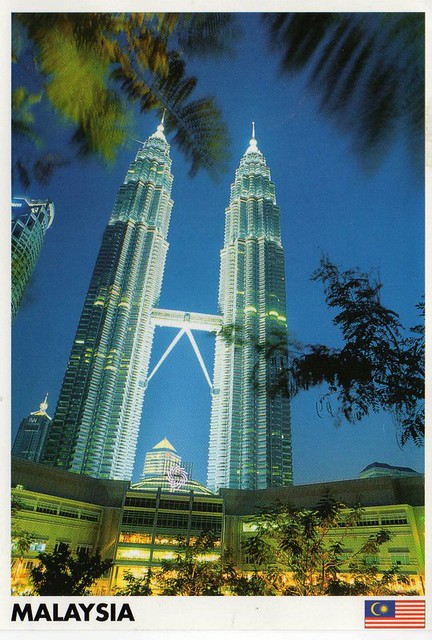 I received this postcard, rather my son received this postcard some time ago. His first actually, he has long been requesting for one so when a mom blogger announced that she is sending postcards I quickly gave her our address with a request for it to be addressed to my son. Pictured here is the Petronas Towers. Situated in  Kuala Lumpur, Malaysia, the towers were the tallest buildings in the world for six years (1998 to 2004).

I’ve often seen the skyscraper from friends’ photos and I find it pretty when photographed at night. I had no idea that it was designed by Argentine architect César Pelli along with Filipino-Malaysian Engineer Deejay Cerico under the consultancy of J. C. Guinto, also known as the Golden Boy of Architecture, and Filipino Designer Dominic “Minick” Saibo until now. The Petronas Towers were completed in 1998 after seven years…whew! “Must have been a lot of workers,” was what my son said when I told him this.