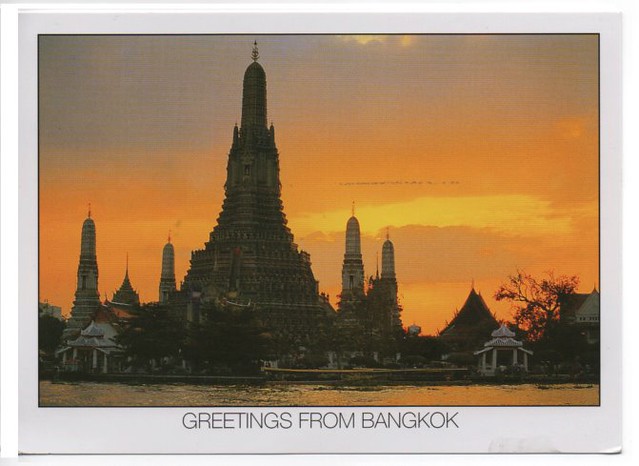 I’ve often proclaimed that sunsets in Southeast Asia are the best – this postcard is proof. Featured is the Wat Arun with a golden sky background…a typical view of sun setting in Bangkok, Thailand. The wat (buddhist temple) is called so as it means “Temple of the Dawn” — apparently, it’s not only during sunsets that the temple looks grand, sunrises make it appear pearly beautiful. The temple is located by the Chao Phraya River and I’ve seen photos where boats abound.

Noticed the prang (Khmer-style tower)? I seriously was confused here since I also received a postcard from Cambodia, that of the Angkor Wat. They arrived within two days apart and I will post the other soon. I was seriously wondering why they almost look the same.

Positively answering my friend’s message written on the postcard, I would want to someday visit this lovely place and take lots of photos.