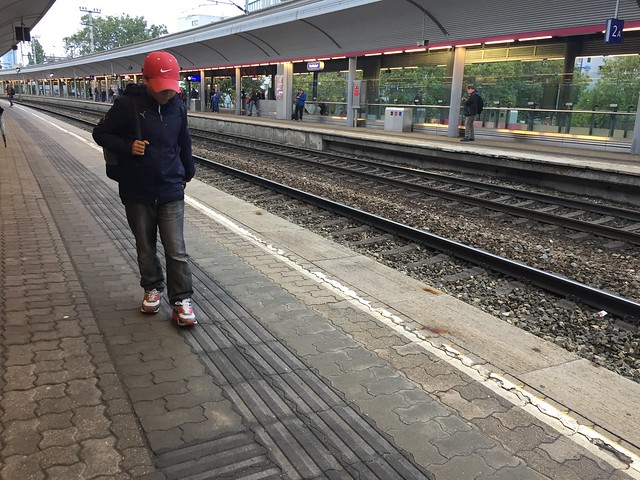 Vienna, I think, has one of the most convenient transportation system around just like Germany, Paris and Prague. At tickets for 49€ a month (45€ if you buy it for 1-year paid automatically via your bank and lesser if you pay the whole year upfront), you get to transfer from trains, trams, buses without the hassle of buying and stamping your ticket again and again. The train connections are carefully planned too. You just have to know which line connects to the other or where to get the next tram so you don’t have to walk 3 blocks down. At the stations, they also have extensive maps for tourists and locals to refer to before boarding. But having a good transportation system has its drawbacks too. We’re so comfortable traveling with public transit that when we have go to the airport we just board the train station near our place. It takes about 40 minutes and because there are lifts at the stations, luggage is not a problem. With that I had no idea what airport parking is. When my cousin now based in Japan visited the Philippines the same time we did, she said she availed of the service before going home, I had to ask her a lot about it (lol).

She said she left her car at the airport – at the care of the parking service officers because she drove from her town to Tokyo instead of taking public transport. According to her it’s easier too to drive from Tokyo back to the town when she arrives from vacationn.  It cost her as much as the plane ticket though. Airport parking ensures that the car is safe and in good condition while owners are away on a vacation.  That could go from a day to two weeks and more, the longer the car stays, of course, the bigger the bill.

Recently, an aunt was on vacation to visit us and she kept complaining about manchester airport parking because she didn’t book earlier as it was a hurried trip to Vienna.

Taking bits and pieces from those two, I learned one can really make good use of cheaper airport parking if one books earlier. There are a lot of websites that have price comparison for Southend Airport Parking, London airport parking and even airport hotels. These parking lots along with those hotels are really convenient for someone who is tired from all the travel. After arriving from 10 hours of flight, he/she stays at an airport hotel, picks her car up from the parking, pay and then drives back home. Voila!